Air conditioners are highly effective tools for combating summer heat, and they can easily cool a space more quickly and efficiently than other mechanical alternatives, such as fans. Their cooling process, on the other hand, is not without flaws. Because air conditioners make use of refrigerants, is it possible that they contribute to the emission of greenhouse gases? The short answer is YES. 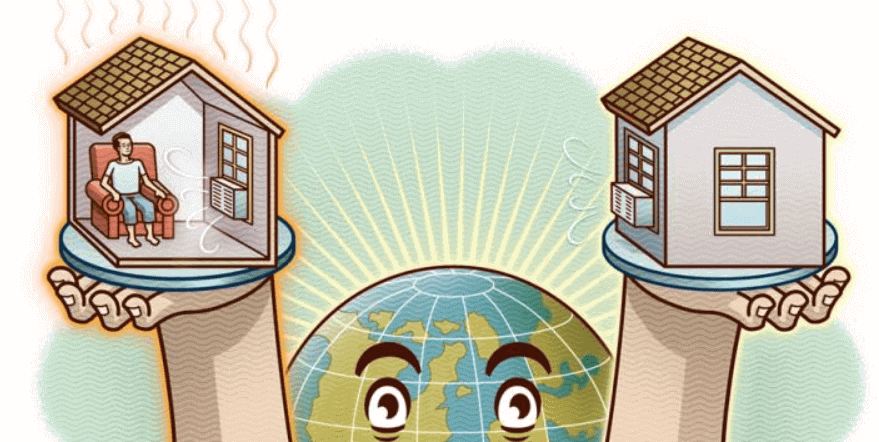 There was a time when air conditioning was a luxury. Today, it has become a necessity in Melbourne and so many other parts of the world. However, air conditioning has become one of the most threatening climate change challenges and complex technological problems to solve. With global warming, we will require additional cooling—not only for our comfort, but also for the health and survival of many people in many parts of the globe.

While air conditioning is more than just convenience and has a profound impact on where and how we live, there’s no denying that it is slowly cooking our planet. And that’s because of the greenhouse gases our air conditioners release. In fact, air cons release way more than 100 million tons of carbon dioxide each year.

How Is Air Conditioning And Greenhouse Gas Connected?

Given the way an AC unit is meant to function, it releases greenhouse gases.  The transmission of air between the interior and exterior of your building is accomplished by your air conditioner using electric coils and an electric pump. A condenser is responsible for moving hot air to the outside, while an evaporator is responsible for pushing cool air to the inside. In order to enable air circulation, a refrigerant must be used. A refrigerant works by converting gases into liquids and vice versa. It is this refrigerant that contributes to the emission of greenhouse gases.

Air conditioners made in the second half of the twentieth century primarily employed chlorofluorocarbons, or CFCs, as the liquid refrigerant, which was sold under the brand name Freon at the time. CFCs began degrading the ozone layer and it was in the 1970s when scientists began quantifying their ozone-depleting features. As a result, manufacturers began substituting chlorofluorocarbons (CFCs) with halogenated chlorofluorocarbons (HCFCs), which have a less detrimental effect on ozone depletion.

How AC Releases HCFC Out In The Atmosphere?

While it is expected that the refrigerant will remain within the coils, there are times when some of it will just leak out of them. Because the likelihood of that occurring is quite minimal, you shouldn’t be overly concerned about them.

It should be noted that leaks are not the only means by which refrigerant can escape from the coils of the compressor. Although the coils are not completely sealed, it is important to note that they are not completely open. Errors in the production and design, as well as prolonged use, may result in the growth of microscopic holes in the products. The older your air conditioning machine is, the more likely it is that some HFC will seep out.

HFCs are extremely harmful greenhouse gases. They capture the infrared rays coming to the Earth from the sun, which would otherwise escape via the atmosphere. The temperature of our world is rising as a result of this.

The frightening part is that HFCs have the potential to be 5000 times more powerful than carbon dioxide, the most common greenhouse gas. This means that when they are flushed out into the atmosphere, they trap 5000 times the amount of heat that CO2 does. HFCs also have an atmospheric lifetime ranging from 15 to 29 years, which means they’ll be causing their share of the damage for a total of 12 years.

How To Reduce Greenhouse Gases?

The fact that HFCs are only released into the environment when an air conditioner is in use means that the most common method of limiting the release of HFCs into the atmosphere is to reduce the quantity of coolant required to cool a space.

Despite the fact that it is a greenhouse gas, HFC is far more environmentally benign than its predecessor. The chlorine-based compounds such as chlorofluorocarbons, which were the major coolants in use prior to the 1970s, were the dominant coolants on the market (CFCs). The difficulty with them is that they behave similarly to HFCs in terms of their great ability to absorb infrared light, but with the extra benefit of producing chlorine, which actively degrades ozone molecules in the atmosphere.

Despite the fact that HFCs are somewhat environmentally friendly, it is still crucial to limit our carbon footprint even when they are released into the environment. In order to lower our HFC emissions, we can do the following three things:

In addition to the presence of holes, leakages are a substantial contributor to the significant amount of HFCs that escape into the atmosphere. Keep an eye on your air conditioning unit to ensure that no coolant is leaking out of it. In the event that you suspect there is a leak, call the specialists immediately.

If you have an air conditioner older than 10 years or require repairs more often, invest in a quality air conditioner. It is because HFC escapes through microscopic holes in older systems. Moreover, newer models of air conditioners are much more advanced and energy-efficient.

When it comes to the environment, air conditioners emit greenhouse gases in the form of hydrofluorocarbons, which contribute to global warming by raising the temperature of the Earth’s atmosphere. Although we do not yet have any viable alternatives to air conditioners, we can surely reduce our reliance on them in order to reduce their impact on the environment.

It is possible to reduce the environmental impact of air conditioners through the use of correct insulation techniques and the regular maintenance of your air conditioning units until we have environmentally friendly cooling choices available. Don’t hesitate to get in touch with us if you have further questions about the latest air con units and their impact on the environment.

A ONE-STOP SOLUTION For All Your Heating & Cooling Needs